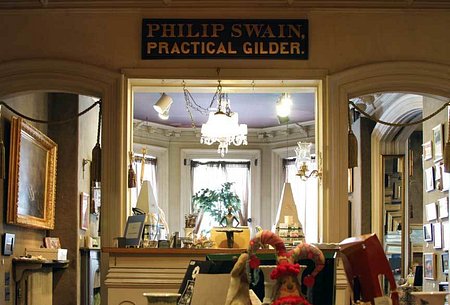 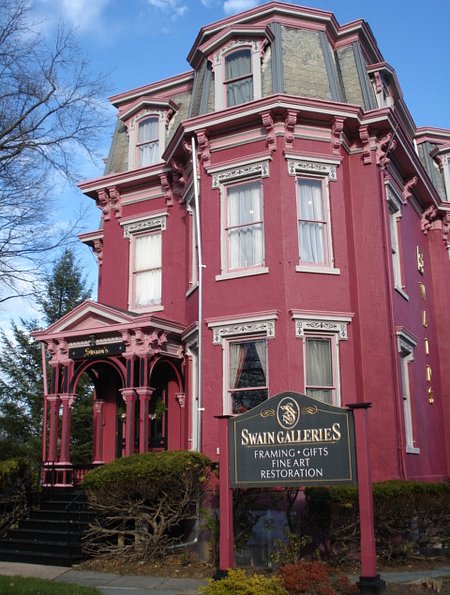 The wooden sign, "Philip Swain, Practical Gilder" hangs proudly over the desk at Swain Galleries on Watchung Avenue. It is the original shingle which hung in front of a business that began 143 years ago - now Plainfield, NJ's oldest retail establishment.

When Philip Swain first arrived at North Avenue station in 1868, he immediately found a vacant store on West Front Street that he opened as a frame maker and practical gilder. At that time there were only two brick buildings in Plainfield, so Philip had to make do in a small wooden shop lit by lanterns on a main street that was still just a dirt road. The Scottish immigrant survived the early hardships and his business thrived in this wealthy community where art was greatly appreciated.

Philip's son Walter took over the business around the turn of the century, and he managed to keep the business going through the two world wars and the depression, despite a severe shortage in supplies and artists materials.

Walter P. Swain, Jr. took over for his father in 1949 and the firm prospered and grew. He expanded the gallery's horizons by going out into the corporate world providing artwork and framing services to firms such as Merck & Company, Johnson & Johnson and Mid Atlantic Bank, to name a few. The gallery's reputation spread and its influence on the area's art community widened.

In the early 1980's Walter Swain, Jr. brought the gallery to its present location, in an elegant Victorian house, in Plainfield's Historic Crescent District, that beautifully houses the collection of original artwork, lithographs, prints and posters; fine china, and wonderful decorative items; as well as the comprehensive framing and restoration services for which Swain's is so well know.

Current owner Ann Swain, the fourth generation of Swains to run the business, proudly continues the family tradition with one simple goal, "To continue with the same quality as my great-grandfather, grandfather, and father did."